The Variable Range Tool Joint Clamp consists of a split hub, tong dies and cap screws all of which are manufactured from alloy steel, heat-treated for maximum strength and gripping ability. Each assembly is machined to incorporate tong dies held in a dove tail groove machined the entire length of the hub. Cotter pins at each end of the tong die prevent the die from falling out of the assembly. The high strength cap screws equally spaced vertically along each side of the hub are tightened to displace the clamp force evenly along the entire length of the tong die. The gripping pressure of the clamp will prevent the threaded tool joints from backing off.

Apply the proper thread compound to the tool joints and make up the threads to the suggested API torque. Remove the cap screws from the assembly and separate the two halves of the clamp. Position the two halves to centralize the assembly vertically around the shafts at the point where the tool joints shouldered together. Begin to tighten the cap screws alternating at 180 degrees to maintain even pressure on each side of the clamp applying force against the outside circumference of each shaft as the cap screws are tightened. 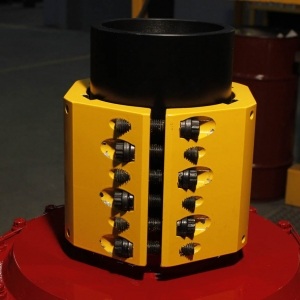 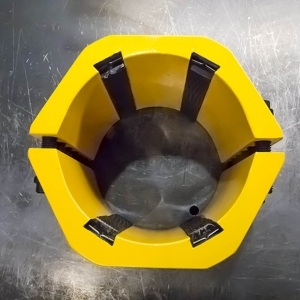